When I was a kid and would look for butterflies, tiger swallowtails always seemed like the prize. And the ones that always impressed me most were the ones with so much blue on the hind wings. Wow, did they just pop! When I got a bit older I learned that many swallowtails are sexually dimorphic, which means the males and females are distinctly different looking. Not all are like this, such as the giant swallowtail. Both sexes look similar. But with the tiger swallowtails, black swallowtails, and spicebush swallowtails, females have noticeably more blue on the hind wing. (Well, with the spicebush swallowtail, the males are a more blue-green and the females a metallic blue). Many other swallowtail species across the world are also sexually dimorphic. A phrase that many butterfly enthusiasts will say to remember this is “girls have blue skirts” In this picture we took you can clearly see the difference in the female on top and the male on the bottom. Often during the summer we will be approached by people who share pictures of swallowtails in the yard and we’ll react, “what a beautiful female (or male)!” “But how can you tell?” Girls have blue skirts. 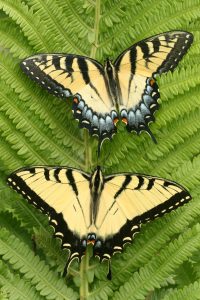