It makes sense that native plants are great for pollinators as they have a history of working together. Even so, we’ve got some favorites that aren’t native too. Here are our four favorites that we sell: Tithonia, Tall Verbena, lovage, and rue. 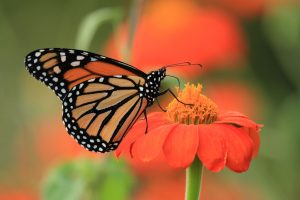 Tithonia (also called Mexican sunflower) is native to Mexico and from what we have read, is a common roadside plant in areas. It gets incredibly tall, 5-8 ft and covered in bright orange flowers that pollinators love. It loves the summer heat and grows like crazy when hot and it’s tolerant of dryer soils. This plant is not only a pollinator magnet, but also loved by hummingbirds. It continues blooming right up to frost and has lots of nectar for migrating monarchs. I tell people who enjoy photography to get these plants and then just go stand out by them in summer. The action never ends. The only thing that is a downer is that it gets so big, some people don’t have room and that it is an annual (gotta replant each year), which surprises many because of it’s size. 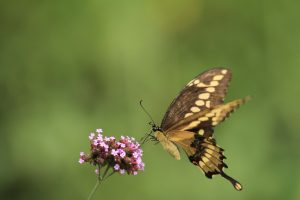 Tall Verbena is another fantastic nectar plant that butterflies and other pollinators love (hummingbirds too!). It gets 3-5ft with narrow stems and light pink/ purple flowers. It’s a very adaptable plant. We get a lot of daytime flying sphinx moths (hummingbird clearwing/ white lined sphinx) at ours. Zebra swallowtails seem particularly fond of it too. It’s foliage is very similar to it’s native relatives, blue vervain and hoary vervain. This is another annual. One negative I have noticed about it is that it is a good self seeder and one needs to watch to make sure it doesn’t show up where it is not wanted. 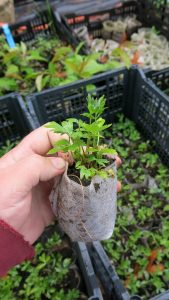 Lovage is a perennial herb that gets the nickname “poor mans celery” because of it’s similar taste. It is in the same family as celery and other garden plants like dill, fennel, and carrot. Like these it is the host for black swallowtails. The reasons I think these are great plants is that unlike it’s garden relatives, lovage is a perennial. It also loves cool weather and grows quickly in the spring. When the overwintered black swallowtails start emerging from their chrysalis in spring, lovage has lots of foliage for their caterpillars. Lovage doesn’t really like heat, so they can look haggard in summer, but bounce right back in fall and survive frosts till we get a good freeze.

Rue is another perennial herb. It generally stays under 3ft and has woody looking stems from which it sends out new growth in spring. It gets little yellow flowers in early summer. I often get asked what pollinators like the flowers and it doesn’t seem to be a favorite of many, but the one I do notice on them are mud dauber wasps. Mud daubers are beautiful (black and metallic blue/ purple), not aggressive like some wasps, and good pollinators. The great thing about rue is that it is the host for both giant swallowtails and black swallowtails, which use hosts from different families. With a rue plant you can find caterpillars of either and witness either species female butterflies laying eggs. One thing to be careful of is that the foliage can cause a rash in susceptible people.

We anticipate having all these plants available this season. 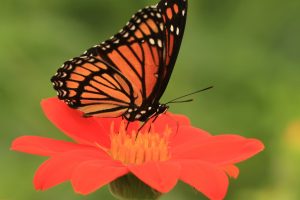